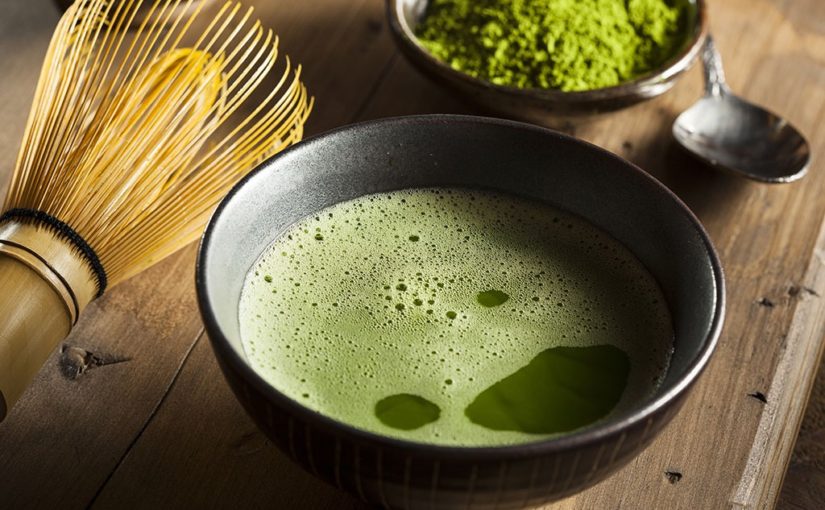 I know it’s cliché, but it’s kinda true–when one door closes, another one opens (or, if you’re religious, “Close one door, and God opens a window.”). And sometimes it’s the very best things that come through that next door.

That’s what happened to me when I had to stop drinking coffee (for a medical reason) and subsequently encountered matcha.

“What the bloody hell is matcha?” I hear you asking. (Yes, I can hear you. That’s why I know you said it just like that.)

Well, I’ll tell you, because I don’t want you to have to open and close a whole lot of doors just to find out. I’m thoughtful that way.

Matcha is green tea. But not just *any* green tea. It’s special, Japanese shade-grown tea that is dried and stone ground. You mix this powder into water (or milk or almond milk, if you’re making a green-tea latte) and drink it. So you’re consuming the whole leaf. I’ll tell you why that’s so noteworthy in a moment.

As I mentioned, real matcha comes from Japan, and only from Japan. It’s the special tea used in Japanese tea ceremonies. There are different grades of matcha. Only the finest is used for tea ceremonies (unsurprisingly, it’s called “ceremonial grade”). Then there is “culinary grade,” which is used to make things like green-tea ice cream, green-tea lattes, and so on. The difference is that the ceremonial grade is the finest, least bitter matcha, so it’s perfect for drinking on its own. Culinary grade is good for baking or mixing into milk, because the other ingredients soften the bitterness. It is less expensive than ceremonial-grade matcha.

You can buy matcha grown in other countries, but most people advise against it. It will probably be less authentic. You want your matcha to be a gorgeous bright green. Its taste should be delicate, never pungent. Thai matcha and Chinese matcha often have a duller green color. They may also be of dubious quality. The Japanese are meticulous about their matcha, so you can trust them.

Matcha ranges in cost from the super expensive to the only kinda expensive. You only use a little (maybe a half-teaspoon for a cup of tea, depending on your tastes), so it’s less expensive than it seems at first blush. Really good ceremonial-grade matcha costs anywhere from $25-$50 an ounce (it usually comes in 30g packages, so that’s actually just a hair over an ounce). Ceremonial-grade matcha is delicate. They usually sell it in little tins, to ensure that it stays airtight and dry.

Culinary matcha actually has its own set of grades: premium grade, café grade, ingredient grade, kitchen grade, and classic grade. One makes the choice depending on their sensitivity to bitterness, their love for the full flavor, and the application. I have become completely addicted to green-tea lattes at home, made with almond milk, and I use café-grade matcha. The brand I purchase–Jade Leaf Organics–sells a great value-sized package: 100g for $19.95. (No, I am not a paid sponsor for Jade Leaf. It’s just my jam. My kid, who believes he knows just about everything, recommended it. He was right about this one.) In general, you can buy culinary matcha for between $10-$25 for 30g. If you find it significanly cheaper or more expensive, be wary.

Besides its delicious taste, it has a number of different health benefits that make it even more awesome. Regular green tea has a lot of these same benefits, but they’re augmented with matcha, because you’re consuming the whole leaf, as opposed to a mere infusion:

Love comes in all colors and all flavors. Although I still miss coffee, my new love affair is definitely lessening the pain of its loss.

If you’re interested, feel free to drop me a line at back brianna@lifetheuniverseand.wtf and I’ll send you the recipe for my awesome vanilla green-tea latte with almond milk. Feel free to leave your own recipes in the comments, as well.

2 thoughts on “A Love Letter to Matcha”