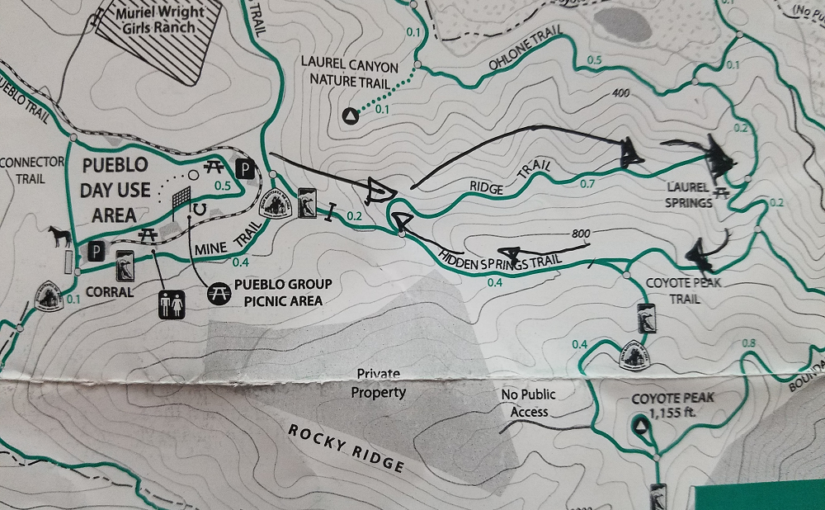 I have been through some very tough stuff in my life (as have we all). In several of those situations, I was surprised at what I could survive. And in retrospect, I’ve been able to see how tough those moments made me.

I’ve come to understand that there is a difference between the limits we create for ourselves and our true capabilities. I know that there is sometimes a very long distance between what I am willing to do and what I am able to do.

Today was one of those days.

I am a risk taker. I always have been. But by and large, the risks I’ve been willing to take in my life have not been physical ones. For some reason, I’ve always been able to leap into mental and emotional challenges. But I’m no thrill seeker, and I’m no athlete. In fact, I’m kind of a couch potato. Hate to admit it, but it’s true.

Over the last year, I’ve been trying to get into better shape. Or, I should say, I’ve been trying to burn more calories, because I’m trying to lose weight. In fact, I’ve lost 81 pounds so far, and I’m proud of that. In the process, I’ve steadily increased my fitness. Now I can walk further, lift more weight, and do some workouts that would have been inconceivable to me just a year ago.

As part of this effort, I’ve started occasionally taking my dogs and heading out to a local county park to take some short hikes. And somehow, without trying, I’ve come to crave those hikes. I have developed a longing to spend time alone away from the ubiquitous Silicon Valley cars and people. Santa Teresa Park is the perfect antidote.

When I say “short hikes,” I really mean short. Before this weekend, I think the furthest I went was about 45 minutes. Two miles or less. Small potatoes for other folks, but pretty challenging for me, although I’ve been able to go further and further as time has gone on.

When the sun came out yesterday, I decided to hit the trails. It was pretty hot, so I left the dogs at home.

One thing to know about me is that I’m perpetually lost. I seem to be missing a sense-of-direction gene. Thank God for my trusty navigator.

I also am really crappy at reading maps. So it was no wonder yesterday when I got lost on the trails. I had studied the map for a long time before heading out, and I thought I had the route down. Regardless (and somewhat predictably), I got lost pretty quickly. Of course, this doesn’t throw me off my game too much, since I’m so used to being lost. At this point, I take it in stride. A couple helpful folks along the way pointed me in the right direction, and I made it back ok.

It was hot yesterday, and because I went the wrong direction, I ended up having to go up a pretty steep hill. Ultimately, I expended more energy and went significantly further than I’d planned. I was tired and sore this morning. So, I don’t know what possessed me to go back again today.

“I’m only going to be gone for a little bit,” I told Andrew. “No way am I going to take a long hike, like I did yesterday. I’m going to cut it short.”

This time I decided to park in another location and go in a direction I hadn’t gone before. I picked a route on the map, determined not to get lost. The route looked pretty straightforward, and relatively short. It also looked easier than the hike I’d taken the day before.

Did I mention that I also have absolutely no idea how to read a topographical map? Yeah. Whoops.

The route I took was straight up a very challenging hill. It was also about 85 degrees outside, which made it extra hard. I figured that this would be the only steep part of the hike. I pushed myself. “You can make it,” I told myself. “Challenge yourself.”

The good news was that I didn’t get lost. The bad news was that it was way more difficult than I thought at the outset. That first big hill was only an appetizer. I had no idea what was to come.

Finally, I got to the ridge top in the blazing sun. I stopped to drink some water. The trail sloped down beneath me. “Cool,” I thought. “It’s all downhill from here.” I was pretty beat by this time. 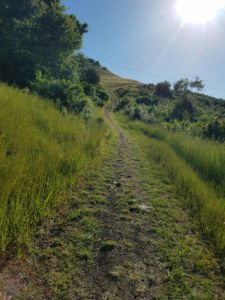 Well, it did go downhill. Like vertically downhill. It quickly became treacherous. The path was loose gravel, and there was no room for error. I was wearing my lightweight running shoes. (I don’t even own hiking boots, although I plan to buy some very soon, after this experience!).

I got scared. Really scared. I thought, “Man, if I fall, I’m going to be in a world of hurt.” I was wearing shorts. I knew I’d get super scraped up if I slid down that hill. I turned sideways and went down excruciatingly slowly. I was really wishing I hadn’t gone alone. There was *no one* on that trail. (Probably because they could all read those topo maps and knew it was a ridiculously tough trip.)

I texted Andrew to tell him I was going to be late. I had no idea if he’d get the text, because I had no cell phone bars. I became even more frightened. If I hurt myself out here, how would anyone find me? 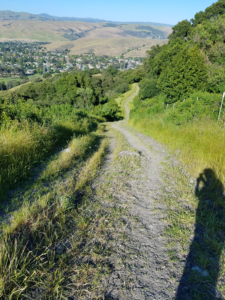 Finally, I made it to the bottom of that ridiculous slope. And then, to my horror, I looked up and saw that I was faced with…The. Biggest. Damn. Hill. I’ve. Ever. Climbed.

I despaired. “How the hell am I going to be able to climb up there,” I thought. I had to rest every 20 feet. At least I knew I wasn’t going to fall going uphill.

Somehow I made it to the top of that hellish hill. And then I looked down. You guessed it—another nightmare downhill slope. I wanted to cry. This was ridiculous. I didn’t know how on earth I was going to make it back.

Lather, rinse, repeat. The same scenario, over and over again.

When I came over the last hill and saw the parking lot in the distance, I almost got down on my knees and kissed the ground. It was still pretty far away, but at least I could see it.

Twenty minutes later, I arrived back at my car, sweating and panting. I got into my little Mini and sat there breathing and blasting the air conditioner. I could barely believe that I’d made it. 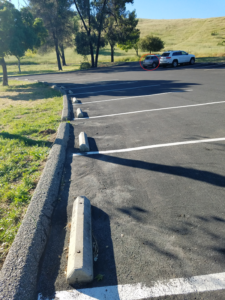 Did I feel a sense of happy accomplishment?

NO. I felt traumatized. I cursed my inability to read topo maps (which would have shown me how steep the route was). I kicked myself for setting off on a hike like that alone.

But it’s over, and I lived to tell the tale.

Would I do it again? Hell, no. I don’t even know if I ever want to go back to that park again.

But somehow, I know I’m going to go back…after I learn how to read a topographical map.