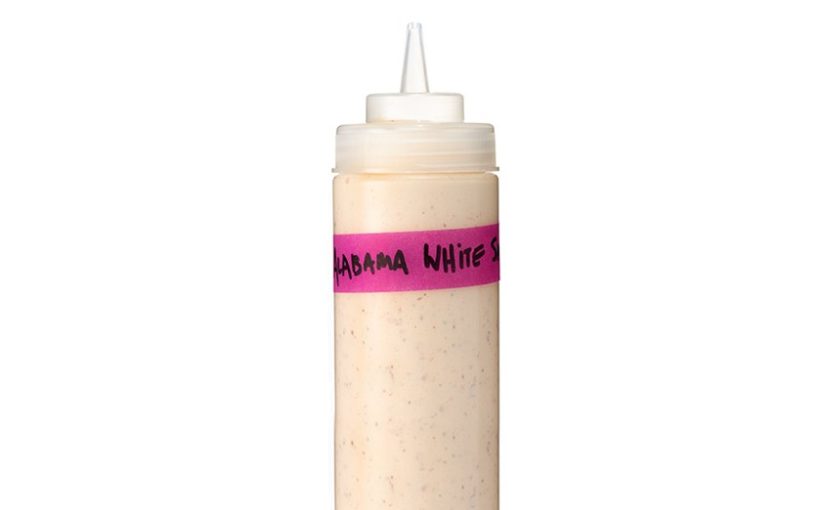 Here in Yankee territory, the term “barbecue sauce” usually refers to a sticky, thick, red sauce that you slather on your ribs. But that’s the reason—it’s Yankee territory. In other parts of the country, most notably in the south, sauces that accompany meat can range from thin, vinegary sauces to Kentucky “black dip,” a Worcestershire-based sauce that’s typically served on the side.

The following is a quick-reference guide to regional barbecue-sauce styles, in alphabetical order. I’ve included links to recipes, as well, so if you can’t find them in your neck of the woods, you can whip up a batch of your own.

While you’re apt to see Kansas City-style sauce in Alabama, it’s best known for its unique white sauce, so named for the mayonnaise it contains. In addition to pork, Alabamans love their white sauce on smoked ham and chicken.
Recipe >>

Often referred to as “the barbecue capital of the world,” Kansas City is home to the classic sweet, smoky red sauce—the typical variety you’ll often find in the local supermarket (think KC Barbecue, or Sweet Baby Ray’s, for example). In Kansas City, this type of sauce is prone to show up on anything, including pork, chicken, or beef.
Recipe >>

Barbecue in Kentucky is a mix of regional styles. But outside of the standards (brisket, ribs, pulled pork, chicken, etc.) there’s something that sets it apart from the other states—mutton, which is often served with something called “black dip.” Black dip is particular to a small area of western Kentucky, just west of Louisville, around Owensboro. It’s is mostly vinegar and Worcestershire sauce.
Recipe >>

A twist on St. Louis style is Memphis-style barbecue sauce. It’s also a tomato-and-vinegar-based sauce, with a sweet-and-sour flavor. It features Worcestershire sauce, molasses, mustard, and celery seed, and is commonly found on or with ribs and pulled pork.
Recipe >>

Like its northern counterpart, South Carolinians love their pork. However, unlike North Carolina, South Carolina is known for mustard sauce. Apparently, it’s a hand-me-down from German immigrants who were early settlers there. It’s a great choice for chicken.
Recipe >>

Like in Kansas City, barbecue sauce in St. Louis is tomato-based. However, as opposed to the sugary creation you might find in Kansas City, St. Louis’ style is a tangier mixture, thinned with vinegar. It’s apt to show up on or with ribs.
Recipe >>

Texas-style barbecue rarely involves sauce. Instead, the Lone Star State focuses on the unique flavors imparted to slow-smoked meat from the wood used in the cooking process. The exception is Texas Mop Sauce, a thin mixture painted on brisket as it smokes. It is designed to keep the meat moist (although when I smoke meat, I use water in the smoker water reservoir to do this, as a mop sauce can soften the crust, or bark, on the outside of the meat). However, I do not mind having a mop sauce on the table to accompany my brisket. That said, I’m no Texan, so my opinion may be suspect!
Recipe >>

Do you have a barbecue sauce recipe you’d like to share? Let me know in the comments.