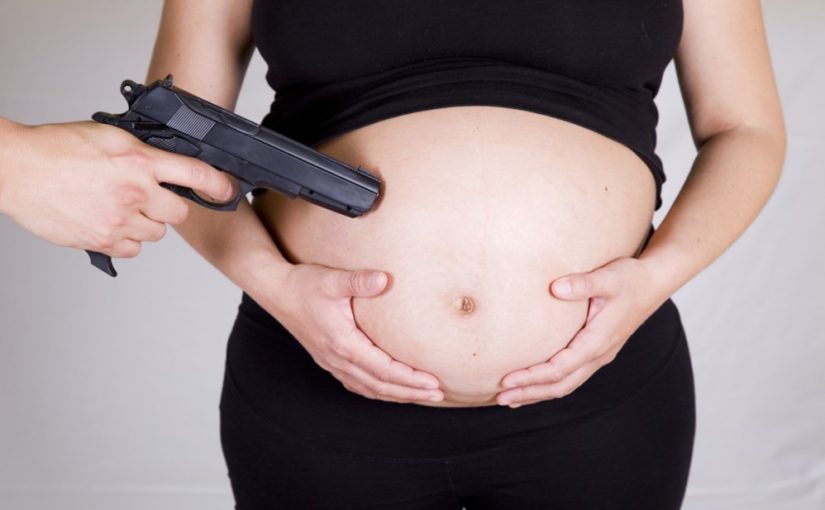 In the comedy “Meaning of Life” by the hilarious British comic troupe, Monty Python, there’s a scene where a Protestant father is explaining to his son how their religion is so much more progressive than the Catholics’–namely, because they can use condoms. In the musical number, you see hordes of Catholics marching around with the dozens of children they believed it was God’s will to bear.

The writer’s point, of course, was that society has progressed past an outdated notion that only God should determine the number of children a family should have. And obviously, they’re “taking the piss” out of the Catholics.

In an ironic twist, the last few weeks have demonstrated that conservative Catholics have, perhaps, become more progressive than a lot of other people, specifically the state of Indiana.

Two days ago, Pope Francis declared that he had extended Catholic priests’ powers to forgive women who have had abortions. (The Pope did note that the church has not changed its stance on the morality of the practice, which it still classifies as mortal sin.)

Incredibly, five days prior, Indiana Republican congressman Curt Nisly announced that he will file a “Protection at Conception” bill. If passed and signed by newly-elected governor Eric Holcomb, it would prohibit all abortion in Indiana and would impose criminal consequences for both doctors who provide abortions and the patients who receive them.

Seriously? Have you heard about a little Supreme Court decision called Roe v Wade, people? I mean, how is it that the Catholic church has officially become more forgiving of abortion than a state in the USA? As I mentioned in a previous blog post, the world has gone stark raving looney-tunes mad.

Now, we live in a free country, my friends. In my interpretation (which has apparently become some kind of a fringe, radical point of view these days), that means you can think and say whatever you want.  However, according to the highest court in the land, this whole “free country” thing is also supposed to apply to women’s’ freedom to do what they see fit with their own bodies.

I’m not a huge fan of abortion (who is?). I’ve never had one, a fact about which I’m simultaneously proud and grateful. That aside, I’m also painfully aware of the dangers of prohibiting the practice.

It is a FACT that women around the world, since the beginning of recorded history, have tried to end their unintended pregnancies, whether legal or not–often jeopardizing their safety and health by self-inducing or seeking a dangerous illegal procedure. Estimates of the number of illegal abortions in the United States during the 1950s and 1960s range from 200,000 to 1.2 million per year. Prior to Roe v Wade, as many as 5,000 American women died every year as a direct result of unsafe abortions. So there’s that.

Additionally, there’s a problem when we start to outlaw things that people are going to do anyway. We start to fill up our prisons with non-violent “criminals,” at tremendous cost to society. We tie up our overburdened court system, too, at the expense of prosecuting violent crimes. Do we really want more murderers on the street in exchange for having thousands of women (often unwed teenagers) in jail?

Interestingly enough, abortion wasn’t always illegal before Roe v Wade. In fact, abortion was legal under common law in the United States leading up to the 19th century, according to Leslie Reagan, professor of history and law at the University of Illinois and author of “When Abortion was a Crime.” There were laws prohibiting the use of induced miscarriages after the time when the mother could feel the baby move in her belly (usually four to five months into the pregnancy). “That was the moral point where people understood there was a life,” Reagan said.

During the recent election, Donald Trump said that “there has to be some form of punishment” for women who get abortions (subsequent to a ban, which he supports). Interesting. So, does that go for everyone–even women who would die during childbirth or women who would be giving birth to a horribly deformed, brain-dead fetus?

During one of the 2016 presidential debates, the incendiary Trump talked about how babies are being “ripped out of their mothers’ wombs at nine months of pregnancy.” I’m certain that this freaked out a whole lot of people and made them jump on the Trump bandwagon. Generally, this is a straight-up lie. (Read this overview of the state-by-state abortion laws for more accurate information.)

The upshot of all this is that this impending Republican presidency–and the fact that both the Senate and the House are now under Republican control–means that the legality of abortion is now being threatened across the entire country.

I have known plenty of women who have had abortions, for a multitude of reasons. One thing they have in common was that they were never happy about it. In most cases, the decision to have an abortion is a heart-wrenching one. And many women feel guilty about it for the rest of their lives. Isn’t that punishment enough?

According to the bible, humans are supposed to leave all that judgy stuff up to the big man in the sky. “Judge not lest you be judged” (Matthew 7:1), and “He who is without sin cast the first stone” (John 8:7), the book says. So, it’s kind of ironic that the State of Indiana fancies itself a higher moral authority.

It’s a confusing and confused time in the United States. I really wonder what will happen with all this. But my gut reaction is to say, “Fuck you, Indiana.”

Yeah, I’m judging. Hopefully, the Pope will forgive me.