I’m taking a storytelling class right now. The teacher has us writing about all kinds of stuff, trying to help us harvest the stories we keep hidden inside of our mental life histories. She says some people have a hard time “finding” their stories. While I’ve never encountered a problem finding something to say about myself (er, ahem), I did have an interesting and somewhat unexpected experience doing one of the assignments.

The teacher asked us to write about our first jobs. She asked a lot of questions, like “how old were you,” “who was your boss,” “how did you leave,” etc. I went through the exercise and answered all of the questions, dutifully recounting the story of my first *paying* job as a waitress in an assisted living facility. 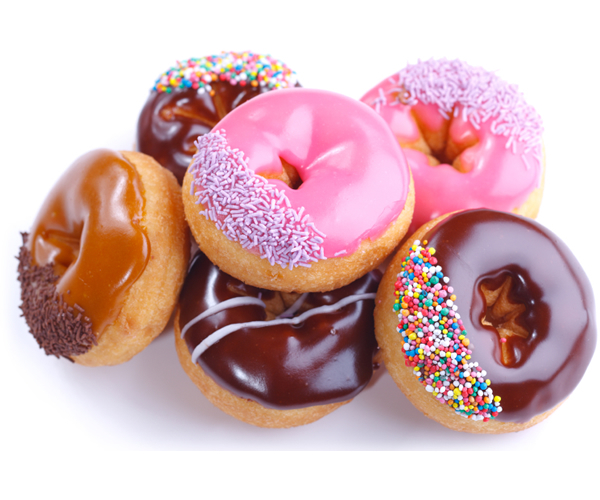 After I was done, I had a revelation–that wasn’t my first job at all! While it was the first job for which I earned real cash money, I had another job when I was much younger, around age 11. I chuckled when I remembered it.

I was a chubby little girl with a persistent sweet tooth. My parents did a good job minding what I ate. Such a good job, in fact, that I grew adept at eating behind their backs. While I LOVED jelly donuts, these were definitely not on the menu at home.

My family lived in an area of Sunnyvale, California, that was almost rural in those days–nothing like the congested Silicon Valley suburb it is today. This was the mid-1970s, and the techno-gold rush had only just begun. There were still giant apricot orchards tucked in between the housing developments. Slowly, these orchards had begun to disappear, giving way to shiny new strip malls and apartment homes.

The donut shop magically appeared one day in the midst of one of those new strip malls across the street. My friends and I were excited. Whenever we had a quarter, we’d go down there and buy French crullers, old fashioneds, and–my favorite–jelly donuts covered in powdered sugar.

It didn’t take long to notice that every time we went into the donut shop, the owner was always hard at work assembling a seemingly endless stack of pink cardboard donut boxes. It was obviously a never-ending job.

I don’t remember the negotiation, but somehow, I talked the owner into bartering with me and my friends. We’d fold boxes for him, in exchange for donuts. He agreed, but said we’d have to be there really early, like 5 am, before the shop opened. We could fold boxes for an hour, and he’d reward us with one donut each.

Now, my parents would never have let me leave the house to walk across Old San Francisco Road in the pre-dawn hours. And they certainly would never have allowed me to eat a donut a day. But I didn’t seek out permission. I just decided to accept the mission, and do what I had to do to make it happen.

My best friend Julie and her little brother Tommy were in it with me. We resolved to set our alarms and sneak out. We’d meet at the corner and then cross the street to our “job.” Julie and Tommy both made it the first day. The next day, I waited and waited for Julie, but she never came. Later, she told me that she had awakened her sister, Janet, and that she had to abort the effort to avoid getting caught. Tommy showed up, at least for the next day or so.

I will never forget those few early mornings (I’m sure we didn’t work there more than a week). It was such a thrill to be up that early, to steal silently out of the house, trying diligently not to wake my parents (I never did!). What a huge sense of anticipation, waiting to see if Julie or Tommy would show. And what an amazing feeling, to earn something from my own work.

In fact, that feeling has never really gone away. There’s a real buzz for me in reaping the spoils of my labor. It might sound crazy, but I absolutely love to work.

The cool thing now, is that I can buy myself a jelly donut whenever I want. And I don’t even have to get up at 5 am.