I have a long and tempestuous history with my female dog, Chica.

To be fair, we started off on the wrong foot. I actually purchased her (as opposed to rescuing her) as a puppy, from a deaf family who swore she was a full longhaired chihuahua. I’m not saying that their deafness had anything to do with the deception I’m about to recount.  But it’s a point of interest, and it’s something that may have influenced her peculiar quirks.

Chica was an adorable little puppy. But soon after I got her, she began to grow longer and longer. Suspiciously so. She grew so long that there remained no doubt that she was not, in fact, a purebred chihuahua, but some kind of mini-dachshund mix. I absolutely detest dachshunds. Loathe them. Turns out, those little bastards are actually the most aggressive dog breed. So, I have good reason, besides their abhorrent looks.

So, as I say, that was the first strike against her. I know it wasn’t her fault, and I know I’m kind of a dog racist. But at least I’m honest, right? That should count for something.

Chica’s second “strike” was that she was straight-up weird from the get go. She was unusually prone to startling. On one of our first walks, we encountered a tiny little Yorkie pup. She was about half Chica’s size. And Chica actually SCREAMED when she saw her, loud enough that it sounded like someone was beating her. It was so bizarre. This is how she earned one of her nicknames, “Squeaka.” She makes these ear-splitting squeaking noises for no apparent reason. You can pick her up to put her on the floor (I have a really high bed, so I help her get down), and she’ll shriek so loud, you feel sure the neighbors will hear and call the ASPCA on you. And I swear, no one is hurting her when she does this. She’s just high strung and weird.

Her third obnoxious attribute is that she is dumb as a box of rocks. A plant with legs. Seriously. Here’s an example: Chica has one, and only one, trick she can do. It took me more than a year to teach it to her. She “shakes.” But here’s the thing. You put out your palm, and tell her “give me five.” She will stare at you for, literally, about a full minute. You can repeat the command, and she just stares at you blankly. Then after that excruciatingly long wait, she’ll s-l-o-w-l-y, tentatively, incredibly softly, tap your palm. It’s like she’s moving through a bowl of clear aspic. Then, after you congratulate her on this astounding achievement, she will start tapping you for the next half hour. You pet her. You stop. Tap. Pet her again. Stop. Tap. Ad infinitum. Eye roll.

But wait, there’s more. Chica is incredibly LOUD. I mean, if I could invent an amplifier or a speaker with the same number of decibels per square inch, I’d be as rich as Donald Trump. No joke. She barks at EVERYTHING. Passing cars. The wind. The mailman. Thursday. You name it, she barks at it. To make matters worse, sometimes she howls like a basset hound.

There was a point where I actually tried to give her away. I know, I know. I’m a horrible person. But again, at least I’m honest, right? Can’t that count for something?

Luckily, although most people I know think she’s cuter than my other dog, Mojo (they’re nuts; I’ll write about him tomorrow), I had no takers. I say “luckily,” because although it took a few years, I have finally accepted the strange little beast for who she is, and we get along famously. She’s super cuddly and affectionate. And, despite all the ridiculous yapping, she’s pretty well behaved. Much better than Mojo.

Chica is seven years old now, and I’ve decided to let her stay. Her quirks add levity to a world that can definitely be difficult and depressing from time to time. And her big brother, Mojo, would be absolutely lost without her. I guess, at this point, I feel the same way. 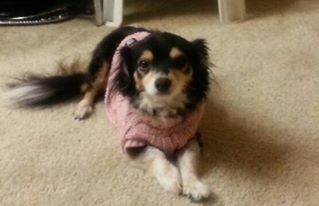